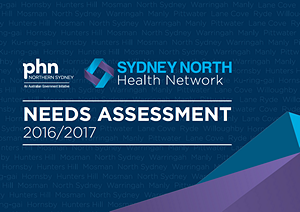 The report was drafted following a process of analysing relevant and current local and national health data; reviewing local service provision and consulting with the community. It was delivered to the Australian Government earlier this year and is now available for public record. It should be noted that as a core element of phn activity, regular Needs Assessments will be developed to reflect latest and updated data and information on a population level.

A core function of a PHN is to perform regional population health based profiling and identify priorities to increase the efficiency and effectiveness of medical services for patients, particularly for those at risk of poor health outcomes. In understanding our region’s need, SNHN can then commission local health services to meet the identified health needs of our most vulnerable and at-risk groups. SNHN will start its commissioning work this July.

On the surface the SNHN inaugural Needs Assessment reveals a population demographic that appears to enjoy relatively good health with the highest life expectancy in Australia and premature mortality the lowest in the country. Indeed this is good news.

However scratch beneath the surface and the story is quite different. The report finds a changing, growing and ageing demographic that across the age ranges is facing a number of health challenges. There are at-risk population cohorts, geographic hot spots and specific health issues. Pockets of disadvantage also co-exist among the affluent within a number of suburbs.

There are issues relating to the impact of the social determinants of health, such as access to primary care, stress and addiction, which can impact health outcomes.

Specific detailed investigation into Mental Health, Urgent Care and Health of the Elderly were identified by both preceding Medicare Local Needs Assessments, and by our partner, the Northern Sydney Local Health District (NSLHD), as the top areas for health concern in the region. These findings were confirmed by the SNHN Clinical and Community Councils.

A thorough understanding of our local populations health needs will mean SNHN can target its work to the areas that are much needed and commission services that will ultimately lead SNHN and our primary care partners towards achieving together; better health, better care for our community.

A Snapshot of the SNHN Health Population