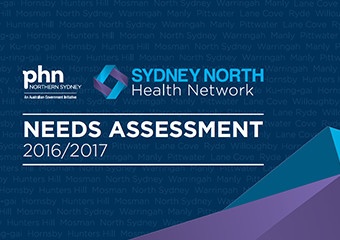 The Needs Assessment presents a local population with the highest life expectancy and lowest premature mortality in Australia. However a changing, growing and ageing demographic highlights the at-risk groups, geographic hot spots and specific health challenges that need to be addressed in the Northern Sydney region.

“The Needs Assessment is a vital piece of population health planning and service analysis that increases our understanding of the health needs of our community now and into the future,” said Sydney North Health Network (SNHN) CEO, Ms Lynelle Hales.

“The report findings will play an important role in determining and shaping the delivery of local, primary healthcare services, including youth mental health and chronic condition management, helping us to improve the health and wellbeing of the vulnerable and at-risk in our community.”

The Needs Assessment analyses 73 health areas and encompasses a region of 899 square kilometers with a total population of 892,566. A snapshot of the findings from the report include:

The Needs Assessment is presented by key health themes that have been identified as top areas of concern – Health of the Elderly, Mental Health, and Urgent Care. Issues relating to the impact of the social determinants of health and there outcomes, including access to primary care, stress and addiction were also explored.

“The next step in our population health planning and response is to commission health services that will meet the identified needs of our priority and at risk community groups,” said Ms Hales.

“We will collaborate with our health partners including the Northern Sydney Local Health District, general practice and allied health providers to build the workforce and maximise service usage so together we can achieve better health and better care for our community,” concluded Ms Hales.