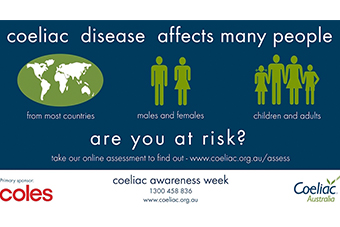 Coeliac Australia’s new national awareness campaign highlights the face of coeliac disease is as diverse as the range of possible symptoms.

The campaign aims to increase awareness in the community, especially with health professionals that coeliac disease can occur in many different people from diverse backgrounds and ethnicities.

“But the true face of coeliac disease is much broader. We now know that coeliac disease doesn’t discriminate, it affects people from all around the globe, males and females, with a range of symptoms.”

Coeliac Australia has multilingual Fact Sheets about coeliac disease and the gluten free diet on its website coeliac.org.au/multilingual.

Coeliac disease is a serious autoimmune illness occurring in one in 70 of the population. However, only 20 per cent of affected Australians have a medical diagnosis.

Dr Tye-Din said, “It is important that doctors are familiar with all the signs of coeliac disease, not just abdominal symptoms such as diarrhoea, weight loss and bloating.
There are related issues such as lethargy, infertility, liver disease, anaemia, osteoporosis, other autoimmune diseases and even some forms of cancer.”

Targeted testing by GPs of people who have at-risk symptoms or medical history is the best way to identify those with coeliac disease.

Coeliac Australia has online resources for health professionals to support the diagnosis of coeliac disease including a new Fact Sheet: Testing and Diagnosis of Coeliac Disease in Children.

Chronic Disease Management templates for children as well as adults are also available on the Coeliac Australia website at coeliac.org.au/resources. These incorporate a GP Management Plan and Team Care Arrangements documents.