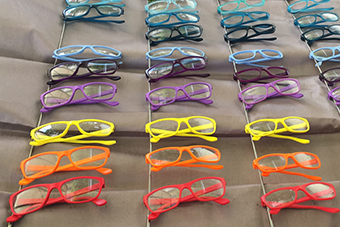 “My god, you’re walking around with Arnhem Land on your eyes.”

Rhonda Townsend is thrilled to learn that her new pair of spectacles are made from recycled materials; everything from milk bottle tops and beer keg lids to discarded fishing nets that wash up on the beaches of Arnhem Land.

The latter is an extra special feature for Ms Townsend.

“To know that our land’s being looked after, to know that things are coming from the land, because we’re all part of the land, being Indigenous, it’s wonderful,” she told SBS News.

The glasses are made by Dresden Optics, an Australian company that began as a start-up in 2015 and now owns six stores across Sydney and Melbourne.

Made “in the spirit of German design,” their regular frames are made from fully recyclable nylon, while others are moulded from other people’s rubbish. They retail at $49.

Melanie Gould, the Aboriginal health coordinator for Sydney North Health Network, says access to such services is often a barrier.

“They’re not going to the doctor, the hospital, to get the checks and then it’s not being identified,” she said.

“Whereas if they have a mobile clinic like this, it makes it easier for them to come and then we can identify whether they need further ophthalmology referral.”

Cost, she adds, is another factor but the mobile service is tackling both accessibility and affordability. Patients are able to have their eyes tested and walk away with a prescription and new pair of glasses the very same day.